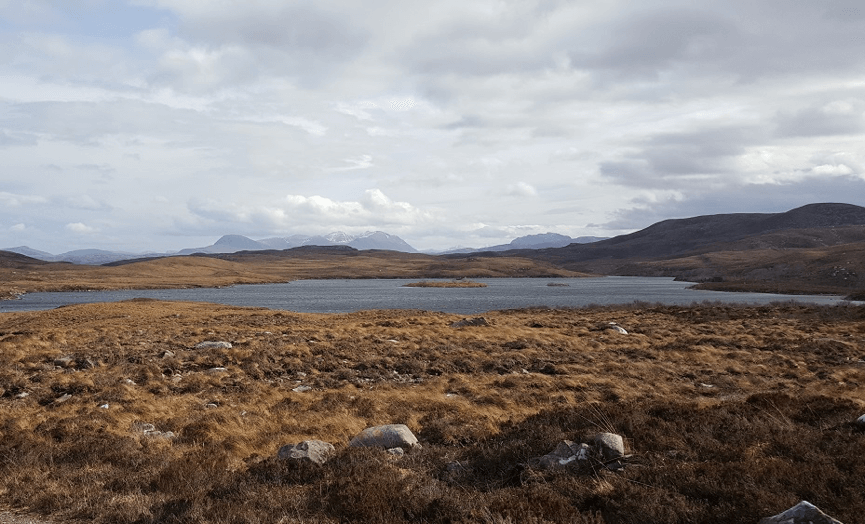 When nature gets itself in trouble should you step in to save the day or let nature take its course? I’m afraid I didn’t give it a second thought; my instinct was to dive in and do what I could to help.

You’ll remember that last week I was an hour into my walk across the moors behind the house at 2A Laide. I’d heard this guttural sound; it was coming from just ahead of me, on the other side of a peat bank. The rain was coming down in sheets and I couldn’t see more than 50 feet in front of me. Walking around the bank I could see a small set of antlers, it was a young buck standing, head bowed on the edge of the bog, in front of its mother and another fawn badly stuck. As I approached the buck ran off, the fawn looked in real danger of drowning and the mother looked completely stuck. She was up to her haunches in the bog.

The moors behind the houses on the north west of the road are almost completely barren of anything before you get to the sea. There are great swathes of amazing if very rugged peat fields, which are essentially formed from ancient Caledonian forests. You do from time to time come across a massive stump and root ball, on this occasion, no such luck. There was nothing lying around that I could use to make some sort of bridge or grappling hook.

I was wearing an elderly and tatty wax jacket, home knitted arran jumper over a heavy padded shirt, moleskin jeans and sturdy walking boots; not the kind of outfit needed to be waist deep in a bog, miles from any living soul. Yet I felt compelled in the driving rain to take off my wax jacket and swing it out over the bog towards the now drowning fawn. From the bank, as delicately as I could I launched myself towards the fawn over my jacket, reaching my hand out to get under its jaw and lift its head. With my other hand I wiped the bog off its eyes and down its nose as my jacket and the bog, gurgling away below us, was slowly enveloping me. As I held its head up I pivoted a leg downward and felt immediate relief as I felt something solid beneath me. Wrapping my arms around its neck I swivelled towards the bank. 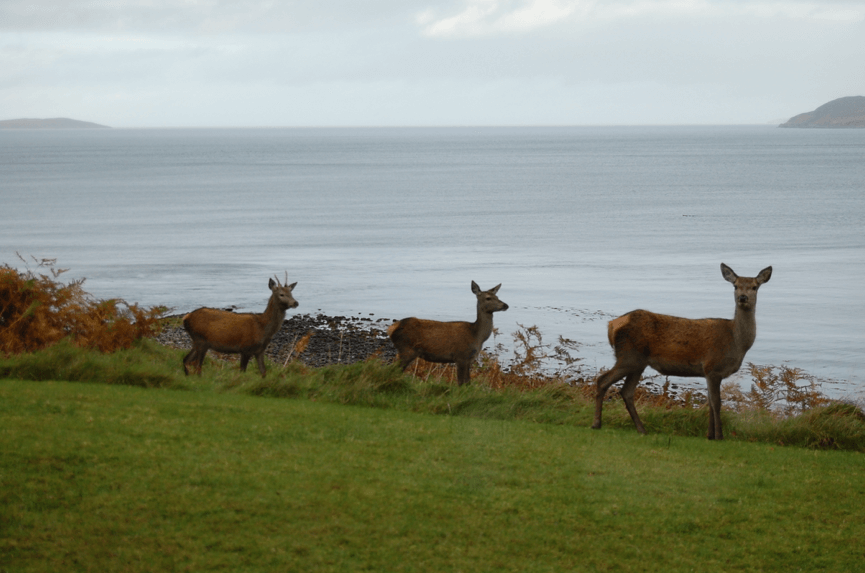 The fawn started kicking with its hind legs as it front hooves got purchase on the bank. I received a sharp kick to my knee as I let go of her; there might have been tears if it hadn’t been raining so hard…

My focus had been entirely on the fawn, I had not noticed the once guttural noises coming from the mother, had stopped. She had freed herself. With the heavy rain you could barely tell she’d been in the bog at all. As they both nursed each other I crawled to the edge of the bog, my coat now wrapped around one leg. I would like to say the mother looked back at me to say thanks as they trotted off. No such luck.

I’m sure the only reason I made it back in one piece, soaked and shivering like a dog drying its coat, was the whisky. I had stashed some gorgeous 12-year-old malt in the coat cupboard at 2A Laide.

I soaked in that bath for an age, dram by my side.

COMING NEXT
Lossiemouth, Home of the Cheeky Blighter PREVIOUS POST
Deer 2A Laide