John Gets his Oats - it makes the whisky mash easier to manage.

He had settled into highland life with James and Leslie fairly quickly; built like a small barn John’s initial jobs came from James. Hiking across the moors in early spring, following sheep paths to find birthing ewes, to getting under the hood of the car to replace a fan belt and chasing poachers away from Little Gruinard River; John had plenty to keep him busy. As the summer months wore on it was Leslie that needed the help. It seemed like the house had taken on a revolving door and the constant visitors were cutting into her distilling time.

John just presumed that Leslie’s “distilling time” was a euphemism for putting her feet up, or propping up the bar at the Drumchork Hotel in the nearby town…

As John latterly found out, Leslie was part of an illicit-still duo that was doing an amazing job of keeping their activities well hidden. Their product (whisky spirit) was essentially for themselves and the local Minister. The whole endeavour came about through accident and evolution.

Leslie and Kay, her partner in crime, were both past retirement age so drew little attention from the local constabulary. Kay’s past - teaching domestic science at the local schools - had led to an interest in the highland past time of distilling whisky. Kay and Leslie faced many challenges in their pursuit, however finding an ‘Alembic still’ was not one of them.

Kay lived in a little community called Inverasdale and although unstable on her feet (due to a large stone falling on her foot and breaking 2 toes in her youth) she could often be seen striding across the moors with her trusty companion Cloiche.

Kay’s Border collie, Cloiche was very attentive, yet her inquisitive nature meant she would invariably run off, reappearing some time later covered in burrs and tics. On one walk Kay thought she’d lost the dog completely, it didn’t matter how long she called out for her she didn’t appear. It wasn’t until she was almost on top of her that she realised Cloiche was entirely disguised in a mossy residue (she’d been rolling in it…). Bending down to brush it off with her hand, Kay realised it was sticky. Following the trail back, she found herself at the edge of a burn beside a large rocky outcrop, it had overhanging heather and moss dangling over the lip at the top. The dog disappeared into the rock… she’d found a very old and well-hidden underground cavern containing the remnants of an illicit still. 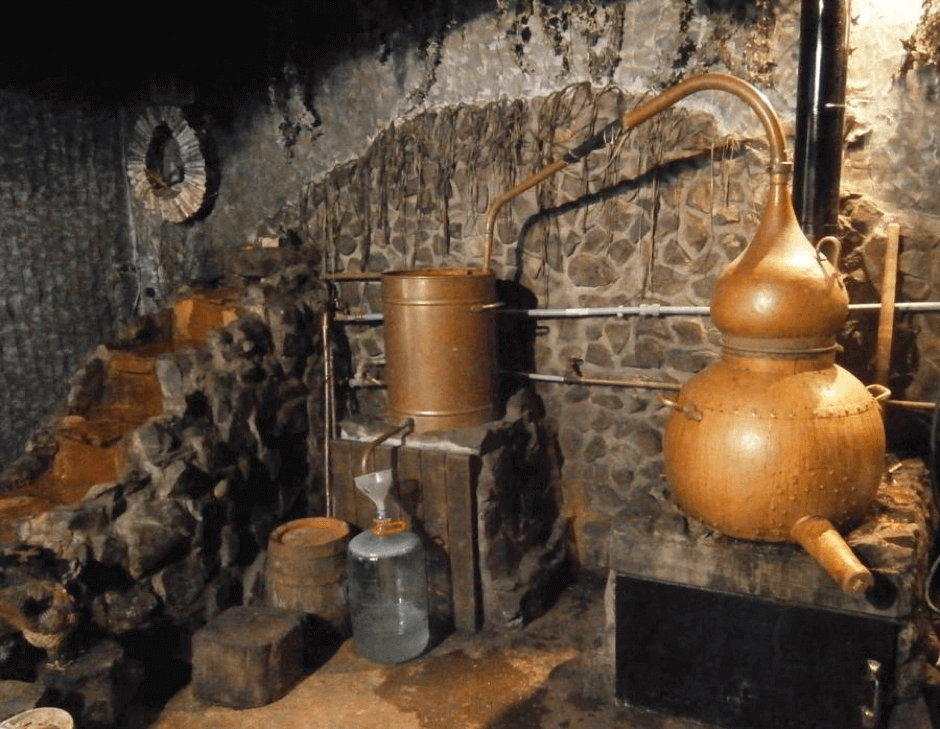 An example of Kay and Leslie’s Alembic Whisky Still

By the time John got involved (and sworn to secrecy in a rather bizarre ritual) the whisky cavern had been back in operation for a couple of years. Kay’s recent research had highlighted that mixing a percentage of oats into the barley mash made the process easier to manage. Could be true, she wanted to find out for herself.

On John’s next visit to Dingwall he was to source this different grain. Being from Northern Ireland, John’s accent was quite thick and the locals would have to concentrate quite hard to understand what was being said. This is why he ended up knocking on the door of Frances Oates. They both howled with laughter when they realised the mistake that had been made. It was the perfect icebreaker to allow two completely unknown youngsters feel very comfortable in each other’s company. Frances jumped into the Little Gruinard car and they drove off up to the Mackay’s farm in Fortrose. It was one of the few farms in the area growing almost solely oats for cereal crops.